World premiere for Renault and We Drive Solar 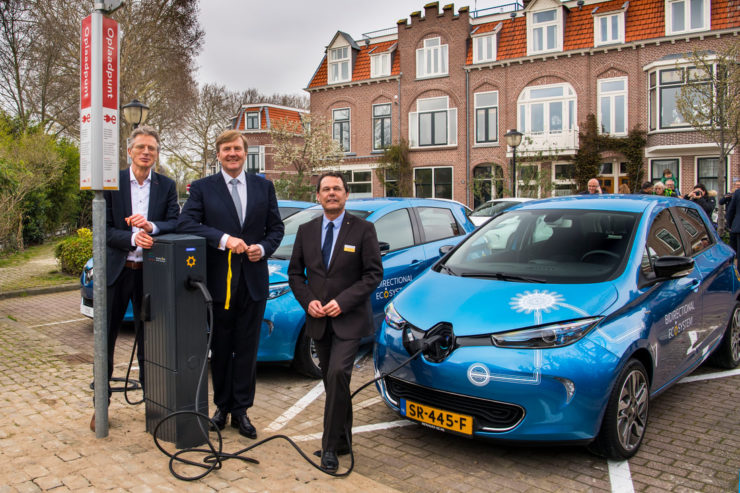 This innovation makes the Renault ZOE a battery on wheels which can store solar energy and later return it to the electricity grid. This enables a more efficient use of sustainable solar and wind energy. The bidirectional technology will optimize the recharge costs for customers and will expand on a massive scale.

The bidirectional Renault ZOE is used as a shared car by We Drive Solar. The city of Utrecht is the first Dutch municipality to choose to implement the new energy and mobility system on a large scale. At least 145 bidirectional charging points will be installed in the city. Agreements have been made with project developers on the use of We Drive Solar shared cars as smart and sustainable mobility for residents of Utrecht city and region.

This world introduction in Utrecht is also the first deployment of the new ISO15118 protocol for AC bidirectional charging that is currently finalized. This protocol allows a bidirectional exchange of energy and therefore makes it in future possible for electric cars to actively take part in smart energy networks.

Robin Berg, Director We Drive Solar: “Our fleet of shared cars is growing strongly. This technology gives us the opportunity to contribute to the rapid growth of solar and wind energy. Our cars will also deliver with bidirectional charging revenue when they stand still, allowing us to reduce the costs for our customers in the future.”

Jerôme Pannaud, Renault General Manager Benelux: “Renault is EV market leader in Europe. But for us, electric cars are much more than just cars. They carry a battery that plays a major role in the energy sector. We are very happy to present today in Utrecht a Renault ZOE equipped with an AC bidirectional solution that contributes to grid stabilization and easier integration of renewable energies. Utrecht is a living lab for Renault.”

The inauguration by His Majesty King Willem-Alexander follows the declaration of intent signed by Renault and its economic partners, the city of Utrecht, ElaadNL and We Drive Solar in the presence of King Willem-Alexander and Queen Máxima during the state visit to France in 2016. The declaration contains agreements on the development of the ‘battery on wheels’, partial mobility on solar power and charging infrastructure with an open standard as a powerful ecosystem. The city of Utrecht is thus a pilot area and living lab for Renault, We Drive Solar and its partners, including Last Mile Solutions and Siers.