Smart Solar Charging in pictures: Gamechanger of the Energy Transition

How can the electricity grid make the energy transition possible? The solution is surprisingly simple: storage of renewable energy in electric cars. The last five years, project Smart Solar Charging developed a citywide network of 500 special charging stations and nowadays 175 electric shared cars. The bidirectional charging stations can charge and discharge so energy can be stored and delivered back to the grid, or used locally for cooking or watching television. Also the first bidirectional electric car is a fact: on 21 April 2022 Hyundai and project partner We Drive Solar launched the first Hyundai IONIQ 5 in Utrecht that can charge and discharge. The Municipality of Utrecht, network operators, knowledge institutes and entrepreneurs in Utrecht worked together towards this solution for the energy transition in the project Smart Solar Charging Region Utrecht, led by the Utrecht Sustainability Institute and supported by the European Regional Development Fund (ERDF). The results are shown in the film Smart Solar Charging: Gamechanger of the Energy Transition. The next three years, the innovation translates into bidirectional city regions in projects FLEET and ROBUST and into European proportions in project SCALE to eventually be rolled out worldwide.

We are facing an enormous challenge: the transition from fossil fuels towards renewable energy sources such as solar and wind energy. But these sources are not always available, because the sun does not always shine and it is not always windy. The technique of Smart Solar Charging offers a solution by storing renewable energy in electric cars for later use.

“The unique thing here is, that energy produces by solar panels during the day, is stored in cars and can be delivered back to the grid in the evening for cooking or watching television.”

The charging station and electric car need to be able to charge and discharge in order to store energy and deliver energy back to the grid, also known as vehicle-to-grid. Not every charging station and electric car is capable of this. There are now 500 charging stations in the city of Utrecht that can. This makes Utrecht a worldwide unique large-scale living lab for vehicle-to-grid. During the project Renault developed the first prototype of a bidirectional car, a bidirectional Renault ZOE. 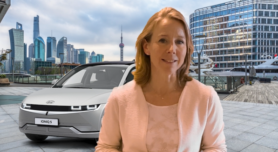 In April 2021, State Secretary Stientje van Veldhoven gave the go-ahead for the collaboration between Hyundai and project partner We Drive Solar. This resulted in the launch one year later of the first bidirectional production-car, the Hyundai IONIQ 5, that can charge and discharge. The launch was even powered by the batteries of the bidirectional IONIQ 5 cars present. We congratulate them with achieving this fantastic result. Now the system is complete for large scale storage of renewable energy in electric cars.

“Together with partners, we have used for the first time an open standard to make the charging stations and shared cars available to all parties in the automotive industry.”

The unique Smart Solar Charging technology has started in a backyard and in five years has been developed into the citywide network in Utrecht of 500 bidirectional charging stations and 175 shared cars we know today. During the project, charging stations and cars were placed in six living labs located in throughout the Utrecht region, to test and further develop the technology.

“We find out in living labs, what is really happening, are our models accurate. And with that we can verify the models. When these are not accurate, we can adjust our models with the date we acquire here.” 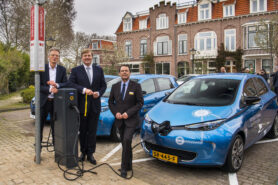 In 2019 King Willem-Alexander opened the living lab in Lombok, a suburb of the city of Utrecht. State Secretary Mona Keijzer opened in 2018 the living lab located in the area surrounding the railway station in Utrecht. But also other locations such as Utrecht Science Park, the city of Houten, Triodos Bank in Driebergen-Zeist, with for years 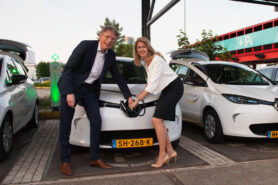 the largest bidirectional charging square in the world, played a crucial role in gathering enough data to turn Smart Solar Charging into a success. Network operator Stedin played a key role in integrating the technique into the electricity grid.

Towards implementation of the technique

Project Smart Solar Charging is a prime example of how local government, businesses and knowledge institutes can strengthen each other by working together. The project Smart Solar Charging has ended, but it will continue. In project FLEET for example, a different aspect of driving electric is investigated, namely how flexible charging rates can help with decreasing pressure on the electricity grid. Also a lot of the project partners of Smart Solar Charging continue together in the project ROBUST, looking to translate this citywide network into city regions. The unique feature of ROBUST is the unusual level of interdisciplinary collaboration. Besides the technique itself, non-technical aspects are given an equal amount of consideration such as end users and their behaviour and wishes, but also how this technique fits into policies and regulations. This is how the technique is prepared on all aspects for implementation. Furthermore, the Smart Solar Charging technique is further scaled up in the soon to start European project SCALE to eventually provide the world with renewable energy at any time.

“That collaboration is very important. Cities cannot do this alone. And with that we make the large scale transition possible.”